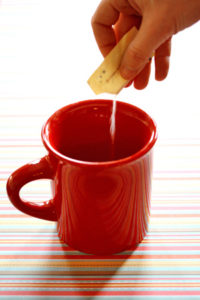 Today I want to tell you about another of the five. This one is Acesulfame K.

Acesulfame K, sold commercially as Sunette or Sweet One, was approved by the FDA in 1988 as a sugar substitute in packet or tablet form, in chewing gum, dry mixes for beverages, instant coffee and tea, gelatin desserts, puddings and nondairy creamers. The manufacturer has asked the FDA to approve acesulfame K for soft drinks and baked goods, and the FDA is currently studying it.

Most people are not even aware that this is a nonnutritive sweetener being used in their food and beverages. It is listed in the ingredients on the food label as acesulfame K, acesulfame potassium, Ace-K, or Sunett. It is 200 times sweeter than sucrose (table sugar) and is often used as a flavor-enhancer or to preserve the sweetness of sweet foods.

In carbonated drinks, it is almost always used in conjunction with another sweetener, such as aspartame

or sucralose. It is also used as a sweetener in pharmaceutical products, especially chewable and liquid medications, where it can make the active ingredients more palatable.

Like saccharin, it has a slightly bitter aftertaste, especially at high concentrations. Kraft Foods has patented the use of sodium ferulate to mask acesulfame’s aftertaste.

Compared to aspartame and saccharin, acesulfame K is even worse. The additive is inadequately tested, as the FDA based its approval on tests of acesulfame K that fell short of the FDA’s own standards. But even those tests indicate that the additive causes cancer in animals, which means it may increase cancer risk in humans.

Acesulfame K breaks down into Acetoacetamide, which has been shown to affect the thyroid in rats, rabbits, and dogs. Administration of 1% and 5% acetoacetamide in the diet for three months caused benign thyroid tumors in rats. The rapid appearance of tumors raises serious questions about the chemical’s carcinogenic potency.

Acesulfame K does contain the carcinogen methylene chloride. Long-term exposure to methylene chloride can cause headaches, depression, nausea, mental confusion, liver effects, kidney effects, visual disturbances, and cancer in humans. There has been a great deal of opposition to the use of acesulfame K without further testing, but at this time, the FDA has not required that these tests be done.

Dr. Sidney Wolfe, Director of the Public Citizen Health Research Group, and a former member of the NCI Carcinogenicity Clearinghouse has said about acesulfame K:

“It is clear that questions arising in earlier — extremely inadequate — studies about the additive’s cancer-causing properties have not been resolved…. Given the likelihood that millions of Americans would be exposed to acesulfame were the additive to be approved for beverage use, the questions about its carcinogenicity must be resolved before a scientifically supportable regulatory decision can be made.”