I started this series on drugs last week, stating that we are a drugged-out nation, and that when you take medications, it lessens your ability to achieve true health.

I’m not saying to quit taking your medications right now, as that may not be a wise thing to do. What I am saying is that you have to consider what your health goals are, and if it’s becoming healthy, then you have to start becoming proactive in getting off or at least cutting down on your medications.

Pharmaceutical drugs are not the answer to health, but it seems to be that people are being programmed to think they are.

That’s because the drug companies are doing a good job of making people think they are the savior.

She went to see her doctor, who said that new regulations are stating that her blood pressure puts her in the pre-high blood pressure category, and that it’s now recommended that when people are in that category they should go on blood pressure medication.

I couldn’t believe when she told me this, and I told her that drug companies must have written that regulation, as the only one that serves is them.

She was wise enough to stop the medication, and she’s doing fine.

But how did we get to this point that drugs use is at such an epidemic level? 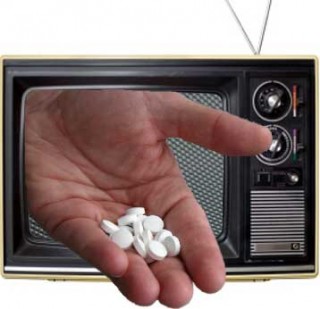 Blame it on drug ads on TV, which before August 1997 did not exist. It was at that point in time when everything changed. That’s when the FDA allowed it to happen.

Prior to 1997, the FDA rules said, “Advertisements promoting the medical use of prescription drugs must contain a ‘brief summary’ of all important information about the advertised drug, including its side effects, contraindications and effectiveness. In addition, advertisements broadcast over radio, TV or through telephone communications systems must include a ‘major statement’ prominently disclosing all of the major risks associated with the drug.”

Prior to August of 1997, print advertisements for prescription drugs were able to meet the “brief summary” requirement by including the risk-related sections of drug labeling together with the advertising copy. As the drug companies looked wistfully at the enormous marketing potential of television, they saw that there was no way to provide the required information about the drug in 30 second or one minute television ads.

Did Congress act? No, the FDA made the August 1997 rule change quietly and without consulting Congress or really anyone else. Their change allowed the drug companies to “…include information about any major risks, as well as instructions for how consumers can easily obtain more detailed information about the drug’s approved uses and risks.”

FDA Lead Deputy Commissioner Michael J. Friedman, M.D was one of the driving forces behind this change long sought by the drug companies. Dr. Friedman said in 1997, “Today’s action can help promote greater consumer awareness about prescription drugs. By describing realistic standards for television advertising of prescription drugs, we hope to end the uncertainty which has plagued both consumers and industry about the use of this medium. The FDA is committed to making sure that accurate and complete information is available to consumers.”

In the 1997 rule revision, the FDA “…presumes that the broadcast ad is truthful, not misleading, and contains information about the major health risks associated with the drug. 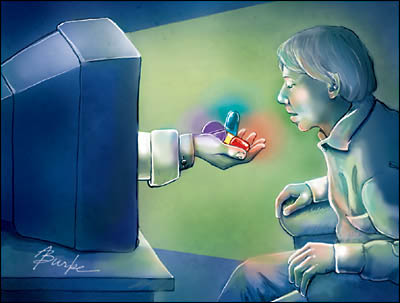 In lieu of providing a “brief summary,” the advertiser would have to provide a mechanism to ensure that consumers can easily obtain full product labeling.” In other words it is enough to quickly list some of the side effects along with a toll-free phone number or web address or advise the listener to speak with a physician.

Shortly after the FDA gave their blessing to the drug companies to advertise on TV, thanks to Dr. Michael Friedman, the good doctor left the agency. In 1998, President Clinton nominated Dr. Jane Henney to be the next commissioner of the FDA, and Dr. Friedman resigned to become a senior vice president at Searle, a subsidiary of Monsanto.

Which begs the question: In whose interests was Dr. Friedman looking after?

The United States and New Zealand are the only two industrial nations that allow the drug companies to advertise on television in this fashion.

As a result of being given the green light to advertise on TV, drug companies have quadrupled expenditures on ads aimed at consumers. Spending on direct-to-consumer advertising increased by 296.4% from 1997 to 2005, from $1 billion to $4 billion.

And the five single drugs with the highest expenditures for direct-to-consumer advertising were Nexium, Lunesta, Vytorin, Crestor, and Advair.

So next time you see an ad on TV, and you hear the famous tagline at the end to “ask your doctor,” remember that drug use in the U.S. has increased exponentially over the last 10 years, thanks in no small part to all that advertising on TV.