“What Krishnamurti has done is to free spiritual life as science has done in other areas. He has maintained that one can be in total freedom from the very beginning to the very end, and he has stood for that, like a rock, for forty years. I think it may well take the world fifty more years to understand that. I think he is the man of tomorrow.”  – Vimala Thakar

The series on Spirituality continues with articles about people who were true Masters of Enlightenment.

What I mean by that term is that they were great spiritual teachers, and also people who lived by the creed they spoke.

They were beacons of light, capable of pointing a finger to help us understand the map of reality.

Today, for the first article in this series, I will profile Jiddhu Krishnamurti.

I say radical because he advised people to break free of their mental shackles and discard dogmas, religions, philosophies, gurus, teachers and theories, and in its place search for the undeniable truth that lies at the heart of reality.

Krishnamurti was relentless in his denouncing of all organized belief, the notion of “gurus,” and the whole teacher-follower relationship. Instead he was single minded in his dedication to the work of setting man absolutely, totally free.

He constantly stressed the need for a revolution in the psyche of every human being and emphasized that such revolution cannot be brought about by any external entity, be it religious, political, or social.

Denouncing the concept of saviors, spiritual leaders, or any other intermediaries to reality, he urged people to directly discover the underlying causes of the problems facing individuals and society.

Such discovery he considered as being within reach of everyone, irrespective of background, ability, or disposition. He declared allegiance to no nationality, caste, religion, or philosophy, and spent his adult life traveling the world as an independent individual speaker, speaking to large and small groups, as well as with interested individuals.

Krishnamurti had first-hand knowledge of gurus and saviors, because he was raised to be a savior – at a young age, he was deemed to be the World Teacher by the Theosophical Society, a quasi-mystical organization founded in New York City in 1875 that had gained prominent international media attention and public interest and was very influential in Indian society.

The Theosophical Society had an estate in India, and in 1909 the 14-year-old Krishnamurti was living on the estate, because his father worked as a clerk for the Society.

Charles Webster Leadbeater was the President of the Society, and he noticed the young boy walking on the grounds. Leadbeater was a clairvoyant, and in the boy he recognized “a spiritual teacher and a great orator,” one likely to be used as the “vehicle for the Lord Maitreya” – the latter, according to Theosophical doctrine, an advanced spiritual entity that periodically appears on earth as a World Teacher to guide the evolution of humankind.

From that point on, Krishnamurti was groomed to be the World Teacher. He was privately tutored in India and Europe, and while in Europe met many prominent, and wealthy, people.

His daily program of studies included rigorous exercise and sports, tutoring in a variety of school subjects, Theosophical and religious lessons, yoga and meditation. At the same time, Leadbeater personally assumed the role of guide in a parallel, mystical instruction of young Krishnamurti.

Over the next few years, Krishnamurti continued his studies, but at the same time began going through a series of mystical and inexplicable life-transforming experiences. He would lapse in and out of consciousness, and described it to others as a “mystical union.” About the experiences he said:

“I was supremely happy, for I had seen. Nothing could ever be the same. I have drunk at the clear and pure waters and my thirst was appeased… I have seen the Light. I have touched compassion which heals all sorrow and suffering; it is not for myself, but for the world… Love in all its glory has intoxicated my heart; my heart can never be closed. I have drunk at the fountain of Joy and eternal Beauty. I am God-intoxicated.”

Over the next few years, these experiences intensified, and these, along with the death of his brother, to whom he was very close, led him to question everything about his journey as the World Teacher. He started changing his teachings and veered from Theosophy, and began to focus on concepts such as questioning authority and liberation, as opposed to following the teachings of any one person.

Finally, in 1929, without any warning, while speaking to the annual meeting of the Theosophical Society in India, he announced that he was disowning his role as World Teacher, and instead would focus on leading people to the unbridled truth. He said in part:

“I maintain that truth is a pathless land, and you cannot approach it by any path whatsoever, by any religion, by any sect. That is my point of view, and I adhere to that absolutely and unconditionally. Truth, being limitless, unconditioned, unapproachable by any path whatsoever, cannot be organized; nor should any organization be formed to lead or coerce people along a particular path.

“This is no magnificent deed, because I do not want followers, and I mean this. The moment you follow someone you cease to follow Truth. I am not concerned whether you pay attention to what I say or not. I want to do a certain thing in the world and I am going to do it with unwavering concentration. I am concerning myself with only one essential thing: to set man free. I desire to free him from all cages, from all fears, and not to found religions, new sects, nor to establish new theories and new philosophies.”

From that moment on, Krishnamurti became his own man, and spoke out on the specifics of enlightenment. He spent the rest of his life holding dialogues and giving public talks around the world on the nature of belief, truth, sorrow, freedom, death, and the quest for a spiritually fulfilled life. He accepted neither followers nor worshipers, regarding the relationship between disciple and guru as encouraging dependency and exploitation.

He constantly urged people to think independently and clearly and free their minds of their own incipient dogmas. “All authority of any kind, especially in the field of thought and understanding, is the most destructive, evil thing. Leaders destroy the followers and followers destroy the leaders. You have to be your own teacher and your own disciple. You have to question everything that man has accepted as valuable, as necessary.”

Included in this was inward authority:
“Having realized that we can depend on no outside authority … there is the immensely greater difficulty of rejecting our own inward authority, the authority of our own particular little experiences and accumulated opinions, knowledge, ideas and ideals.”

Krishnamurti’s home base for the rest of his life was Ojai, California, where he could spend time sequestered in meditation and writing, and communing with nature, which from an early age was one of his passions.

From his home base his insights deepened and his influence grew. He befriended and collaborated with well-known philosophers, writers and scientists, which allowed his audience to broaden. 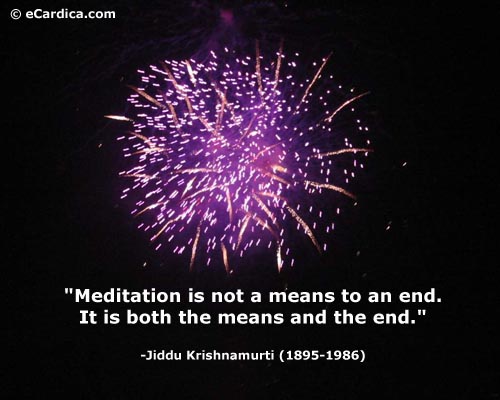 Over the years, his subject matter included psychological revolution, the nature of the mind, meditation, human relationships, and bringing about positive change in society. Maintaining that society is ultimately the product of the interactions of individuals, he held that fundamental societal change can emerge only through freely undertaken radical change in the individual.

“It seems to me that the real problem is the mind itself and not the problem which the mind has created and tries to solve. If the mind is petty, small, narrow, limited, however great and complex the problem may be, the mind approaches that problem in terms of its own pettiness… Though it has extraordinary capacities and is capable of invention, of subtle, cunning thought, the mind is still petty. It may be able to quote Marx, or the Gita, or some other religious book, but it is still a small mind, and a small mind confronted with a complex problem can only translate that problem in terms of itself, and therefore the problem, the misery increases. So the question is: Can the mind that is small, petty, be transformed into something which is not bound by its own limitations?”