Winifred Pristell is 70 years old and lives in the Seattle, WA area. Three days a week she gets up at 3:30am in order to be at the gym by 5am.

Winifred has a reputation to uphold. She’s a great-grandmother who they call “Heavy Metal” because she’s a competitive weightlifter with two world records and aspirations for more.

When you watch the above video, you’ll learn more about Winifred and see her in action.

But she wasn’t born into a fitness type of lifestyle, nor was she on the Longevity track. Winifred was living quite the High Density Lifestyle, and things were looking pretty bleak.

Since then, she’s dropped five dress sizes. The weight just crept up on her, she says. She was working long hours, eating poorly and drinking and smoking too much.

One day while taking a bath, Pristell remembers feeling as though she was dying. She asked her daughter, Cynthia, if she would walk with her.

“I couldn’t walk but a block that first time,” she said.

Every morning the two walked together, a little farther each day. Within a year, Pristell was up to three miles, five days a week, she said. That’s about the point she walked into a gym for the first time in her life. She tried aerobic exercises, stationary bikes, and other machines and contraptions.

Years would pass before she tried free weights and more than a decade before she began lifting weights competitively at the age of 60. 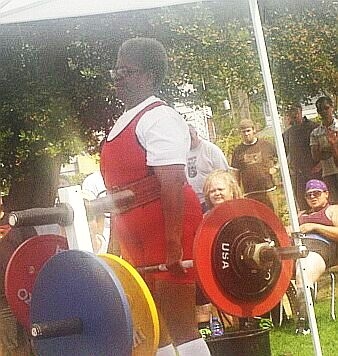 At 68, Pristell set world records for her age in bench press, 176.2 pounds, and in dead lift, 270 pounds, for her age group and weight class, according to World Association of Bench Pressers & Deadlifters. And she’s set scores of other state and national records.

Because of her unhealthy background and where she is now, sometimes Winifred can be a bit blunt. On a recent day at the gym she told a teenage boy who works there that he is too fat. She’s not trying to be mean, she says. Sometimes she just says things without thinking first.

After all, she is a retired barber who was blessed with the gift of gab, so she just likes to talk it up. And she figures if she can do it, anyone can.

After all, she’s a world record holder.

“Sometimes they call me a freak,” Winifred Pristell says. “That’s OK. I like being called a freak sometimes. It’s kind of unheard of, a person being my age doing what I can do. For me, the older I’m getting, the stronger I’m becoming.”

How was it possible for Winifred to so drastically change her life? What lessons can be learned from Winifred that can help you lead a long and vital life?

These life lessons from Winifred Pristell are lessons that can help anybody live a long, vital and happy life. These are also the longevity lessons that we can learn from Joe Rollino, who just passed away at age 104; 95-year-old Jack Lalanne; 83-year-old Bette Calman; and 98-year-old Shigeaki Hinohara.