Home Health And Wellness Diet And Nutrition Stevia: Not What It Appears to Be

I’ve been discussing sugar in all its variations – sugar, high fructose corn syrup, and all the artificial sweeteners – and I’ve been saying all along that all of these are detrimental to health.

Eating sugar and all the sugar substitutes will not allow you to experience healthy living and live a life of health and wellness.

People have asked me though, what about stevia? Stevia comes from a plant, so isn’t eating stevia a healthy alternative?

So I thought I would take a look at stevia and see.

Stevia (STEE-vee-uh) is a South American shrub whose leaves have been used for centuries by native peoples in Paraguay and Brazil to sweeten their yerba mate and other stimulant beverages.

Stevioside, the main ingredient in stevia (the two terms are often used interchangeably), is virtually calorie-free and hundreds of times sweeter than table sugar. Because of this, it appeals to many people as a natural alternative to artificial sweeteners.

While Japanese manufacturers have used stevia since the early 1970s to sweeten pickles and other foods, the FDA has turned down three industry requests to use stevia in foods in the U.S.

That’s why you don’t see stevia on supermarket shelves next to the Sweet and Low or Equal. But you can buy it in health food stores as a dietary supplement. The FDA has little control over supplements.

It does seem rather ironic that the FDA has approved the artificial sweeteners, even when the evidence is sketchy at best, as is the case with acesulfame K and neotame, while they have refused to approve stevia.

It would make you wonder if Monsanto, makers of Nutrasweet (aspartame) and neotame, and McNeill Nutritionals, maker of Splenda (sucralose), have an in with the FDA. If you are wondering that, you wouldn’t be the first.

But regardless of the FDA’s slant, there are some questions about stevia.

When the FDA first turned stevia down in 1994, they said, “we don’t have enough data to conclude that the use in food would be safe.”

To stevia’s boosters, there’s no debate. The herb has been consumed without apparent harm in different parts of the world for many years, they argue. No reports of any adverse reactions have surfaced after 30 years of use in Japan, for instance.

“But the Japanese don’t consume large amounts of stevia,” notes Douglas Kinghorn, professor of pharmacognosy (the study of drugs from plants) at the University of Illinois at Chicago.

“In the U.S., we like to go to extremes,” adds toxicologist Ryan Huxtable of the University of Arizona in Tucson. “So a significant number of people here might consume much greater amounts.”

Reproductive problems. Stevioside “seems to affect the male reproductive organ system,” European scientists concluded a few years ago. When male rats were fed high doses of stevioside for 22 months, sperm production was reduced, the weight of seminal vesicles (which produce seminal fluid) declined, and there was an increase in cell proliferation in their testicles, which could cause infertility or other problems.

And when female hamsters were fed large amounts of a derivative of stevioside called steviol, they had fewer and smaller offspring. Would small amounts of stevia also cause reproductive problems? No one knows.

Cancer. In the laboratory, steviol can be converted into a mutagenic compound, which may promote cancer by causing mutations in the cells’ genetic material (DNA). “We don’t know if the conversion of stevioside to steviol to a mutagen happens in humans,” says Huxtable. “It’s probably a minor issue, but it clearly needs to be resolved.”

Energy metabolism. Very large amounts of stevioside can interfere with the absorption of carbohydrates in animals and disrupt the conversion of food into energy within cells. “This may be of particular concern for children,” says Huxtable.

The bottom line: If you use stevia sparingly (once or twice a day in a cup of tea, for example), it isn’t a great threat to you.

But if stevia were marketed widely and used in diet sodas, it would be consumed by millions of people. And that might pose a public health threat.

And in December 2008, the FDA agreed that rebaudioside A, an extract from the leaves of the stevia plant, is safe to add to food and drinks, opening the door for stevia to be consumed by millions of people, and in the process, possibly posing a public health threat. 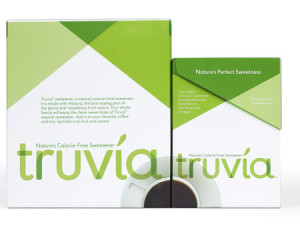 The extract is in the companies’ drinks, too. Among the new stevia products marketed as naturally sweetened are Sprite Green from Coca-Cola and Trop50, from the PepsiCo subsidiary Tropicana. It’s essentially half water and half orange juice doctored with stevia.

To underline their natural claims, stevia products come packaged in green. Manufacturers are blending stevia with other sweeteners to achieve a flavor closer to sugar’s. That dovetails with another trend: mixing different sweeteners, including good old sugar.

The makers of Splenda, which holds more than 60 percent of the retail market, have just introduced Sun Crystals, a mix of sugar and stevia that has five calories per serving. Sugar has 15 calories per teaspoon.

Stevia is being added to some soft drinks that also contain aspartame. And aspartame is being tamed with other, newer and less well-known artificial sweeteners. One is the potent neotame, which is as much as 13,000 times as sweet as sugar and came on the market in 2002.

Another is acesulfame potassium, called Ace K. It’s considered a blending sweetener that helps improve the flavor of other low-calorie sweeteners. It was first used in soft drinks in 1998, but its biggest success is its marriage with aspartame in Coke Zero.

So is stevia something that is good for you? It depends on the source of stevia and how much you use. It appears if you are to use it, it’s best to buy stevia in its unadulterated form, as opposed to one of the blended hybrid forms, and to use it sparingly.

The truth about sugar is that the best types of sugar are the natural occurring sugars that are in whole foods. These are complex carbohydrates: whole grains, fresh vegetables and fruits, and legumes.

Any other form of sugar is much harder for the body to process and metabolize, so if you are to use sugar, you want to use as natural a source as possible, and to use it lightly.