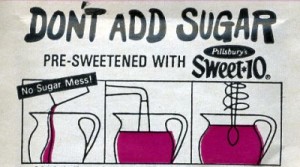 If sugar in its “natural” state (though it’s hard to think of something like high fructose corn syrup, and many other sugar products, as something in their “natural” state) is detrimental to your health, then artificial sweeteners are even worse.

A diet laden with artificial sweeteners will cause all kinds of health problems, and will definitely not allow you to experience healthy living nor live a balanced life of health and wellness.

So let’s take a look at the world of artificial sweeteners, or as they are also called, nonnutritive sweeteners.

Since the 1950s, when nonnutritive sweeteners came into existence, they have been seen as a weight-loss 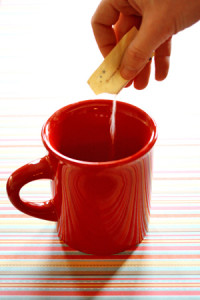 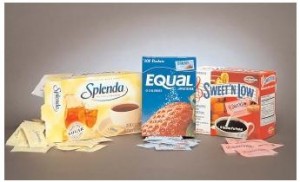 Each of these is regulated as a food additive. In regulating them, the FDA set an Acceptable Daily Intake (ADI) for each additive. The ADI is the amount of food additive that can be consumed daily over a lifetime without appreciable health risk to a person on the basis of all the known facts at the time of the evaluation.

Let’s take a look at the first artificial sweetener on the list: Saccharin.

Saccharin has been around for over 100 years and claims to be the best researched sweetener. Saccharin is

also known as Sweet and Low, Sweet Twin, Sweet’N Low, and Necta Sweet. It does not contain any calories, does not raise blood sugar levels and is 200 to 700 times sweeter than sucrose (table sugar).

In 1977, research showed bladder tumors in male rats with the ingestion of saccharin. The FDA proposed a ban on saccharin, but Congress intervened and allowed saccharin to remain in

the food supply as long as the label carried this warning: “Use of this product may be hazardous to your health. This product contains saccharin which has been determined to cause cancer in laboratory animals.”

But in 2000, the National Toxicology Program (NTP) of the National Institutes of Health concluded that saccharin should be removed from the list of potential carcinogens, and the warning was removed from saccharin-containing products.

But the safety concerns of consuming products with saccharin remain even with the removal of the warning. In response to the National Toxicology Program (NTP) removing saccharin from the list of potential carcinogens, the Center for the Science in Public Interest (CSPI) wrote a report, which said in part:

“It would be highly imprudent for the NTP to delist saccharin. Doing so would give the public a false sense of security, remove any incentive for further testing, and result in greater exposure to this probable carcinogen in tens of millions of people, including children (indeed, fetuses). If saccharin is even a weak carcinogen, this unnecessary additive would pose an intolerable risk to the public.

“Thus, we urge the NTP on the basis of currently available data to conclude that saccharin is reasonably 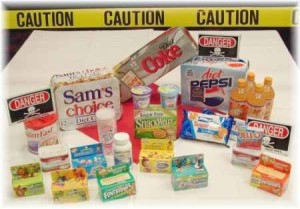 Another claim made against saccharin is the possibility of allergic reactions. The reaction would be in response to it belonging to a class of compounds known as sulfonamides which can cause allergic reactions in individuals who cannot tolerate sulfa drugs. Reactions can include headaches, breathing difficulties, skin eruptions, and diarrhea. It’s also believed that the saccharin found in some baby formulas can cause irritability and muscle dysfunction.

So consuming saccharin products such as Sweet and Low is something that is not conducive to healthy living and can be very detrimental to your health.