I’ve pointed out during this series on obesity that the obesity rates are steadily increasing at alarming numbers in adults and children, and that the number one cause is the prevalence of junk foods and sugar drinks.

Now you can add another thing to the list, and it’s something that most people use on an everyday and regular basis: cars. 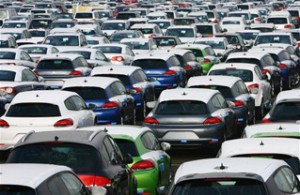 There’s a direct correlation between the obesity rate in a nation, and the amount of driving as a primary means of transportation.

The more walking and biking a nation does, the lower its obesity rate. The more driving, the higher.

Which is why Americans are on average some 15% more obese than residents of European countries like Spain, Germany, Denmark, and Sweden. Only 5% of Americans regularly bike or walk as a form of transit, while over 50% of people in those countries do. And not all of this is purely from the exercise that you get by walking or biking, either.

If you live in a dense, urban, walkable city, you can consume less energy per person than any other kind of environment. It turns out that all that walking keeps you skinny too.

This also means that there’s a correlation between living in suburban sprawl, or sprawling cities, and being obese, because of the amount of driving that has to be done. Researchers are finding that suburban dwellers are significantly fatter than their urban counterparts, primarily because they drive everywhere, even to the fitness club.

If you recall in the article a few days ago, I stated that Miami is the most obese city in the U.S. If you’ve ever been to Miami, you know that it is not a walk-centric city – it is one sprawling megalopolis.

Speaking of sprawling cities, L.A. is another one. Which makes the above music video, The Ride, by the rock band 30 Seconds to Mars really cool, as it’s an ode to L.A. bicycle culture.

It must have taken a lot of work to make the video, because there’s barely a car in sight in the video. Even if you don’t like the video, it’s worth watching with the sound off just for the visuals of the bikers taking over in one of the most car-centric cities in the world.

Call it a fantasy, but we need it to become a reality.

And so, if you’re a conspiracy theorist, you may wonder: the automobile created suburban sprawl, bigger and fuller fridges, the proliferation of fast food restaurants and the decline in the use of bikes.

Could it be that the system is rigged to put people in cars and take them to Wal-Mart and to McDonalds for cheap, fast high-fat food?

No wonder obesity rates are sky-high! And no wonder we’re becoming a world of people stuck in a High Density Lifestyle.