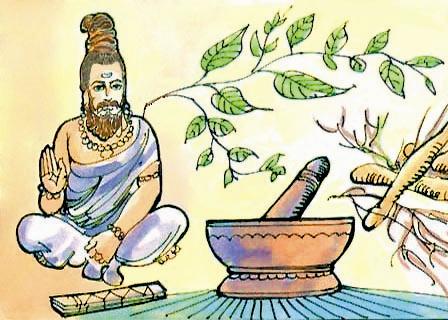 Now I will expand beyond discussing healing approaches and begin to discuss various systems of medicine. As medicine begins to be part of a society’s way of life, it becomes more systematized and formalized, in order that it can be used by the masses.

Ayurvedic medicine is native to India. The word Ayurveda comes from the Sanskrit and means, “Science of Life.” In Sanskrit the word ayurveda consists of the words āyus, meaning “longevity,” and veda, meaning “related to knowledge” or “science.”

Ayurveda springs from the Hindu tradition, although Buddhism has also had a major influence on Ayurvedic ideas.

Ayurveda traces its origins to the Vedas, the ancient classical sacred texts of Hinduism. There are four Vedas, and Ayurveda is said to stem from the Veda known as Atharvaveda, which contains 114 hymns or formulations for the treatment of diseases. Ayurveda originated in and developed from these hymns. In this sense, ayurveda is considered by some to have divine origin.

Dhanavantari is said to be an avatar of Vishnu from the Hindu tradition, and god of ayurvedic medicine. Dhanavantari was an early Indian medical practitioner and one of the world’s first surgeons.

Based on Vedic traditions, he is regarded as the source of ayurveda. He perfected many herbal based cures and natural remedies and was credited with the discovery of the antiseptic properties of turmeric and the preservative properties of salt, which he incorporated in his cures.

There is a quote attributed to Dhanavantri, in which he says, “I the Lord Dhanavantri brought this healing science on earth from heaven.”

Ayurveda is a medicine of the body, mind and soul, and is closely associated with the other Hindu disciplines of yoga and tantra, which together are seen as the three paths of Vedic knowledge.

According to Robert Svoboda, a doctor of Ayurvedic medicine:

“Because every embodied individual is composed of a body, a mind and a spirit, the ancient Rishis of India who developed the Science of Life organized their wisdom into three bodies of knowledge: Ayurveda, which deals mainly with the physical body; Yoga, which deals mainly with spirit; and Tantra, which is mainly concerned with the mind. The philosophy of all three is identical; their manifestations differ because of their differing emphases. Ayurveda is most concerned with the physical basis of life, concentrating on its harmony of mind and spirit. Yoga controls body and mind to enable them to harmonize with spirit, and Tantra seeks to use the mind to balance the demands of body and spirit.”

Within Ayurveda, there are eight disciplines of treatment, known as Ashtangas. They are:

Balance is a central theme in Ayurveda. Balance is emphasized; suppressing natural urges is seen to be unhealthy, and doing so may almost certainly lead to illness.

To stay within the limits of reasonable balance and measure is stressed upon. Ayurveda places an emphasis on moderation in food intake, sleep, sexual intercourse, and the intake of medicine.

To be continued tomorrow…