Home Action Yes is the Answer 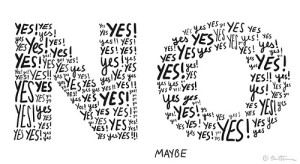 In a recent article I wrote, “Al Gore is Optimistic About the Revolution That’s Coming,” at the end of the article I quoted the poet Wallace Stevens, who says, “After the final no there comes a yes, and on that yes the future of the world depends.”

I then said, “We have such incredible capacity to use our power of yes to bring forth a new world. This is the Revolution, and it is happening. We need to act, and we are doing it.

“We all can be optimistic, because there is good reason to believe. It is called the power of the human mind and the power of the indomitable spirit to create the new, to innovate, to vision, to see what is emerging.

“And it all stems from the yes.

Indeed, Yes is the answer. As John Lennon sang in his song “Mind Games”:

When I say Yes is the answer, I don’t mean that you have to say yes to everything that comes your way, as Jim Carrey did in the movie “Yes Man.”

George Bernard Shaw once said, “You see things; and you say ‘Why?’ But I dream things that never were; and I say ‘Why not?’ “

And that is the question to which Yes is the answer: Why not?

And the answer is we can. Because Yes is the answer. 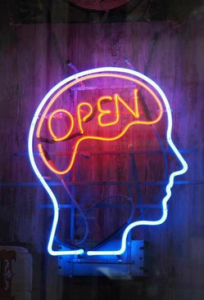 And from our ability to connect to the world of no matter comes all of our great powers, including the capacity to see – and it starts with becoming open to the Yes. As I said, “Yes equals an open future, and an open future is the hope of the future.”

Again, being open to Yes doesn’t mean we say yes to everything and anything that comes our way. We need to use our ability to discern and discriminate, so we understand what makes sense – for instance, if I tell you I have a bridge to sell you in Brooklyn, you better be telling me no, you’re not buying. What being open to Yes does mean is opening the mind to the new.

Sue Monk Kidd, in her bestselling book “The Secret Life of Bees” said, “Every human being on the face of the earth has a steel plate in his head, but if you lie down now and then and get still as you can, it will slide open like elevator doors, letting in all the secret thoughts that have been standing around so patiently, pushing the button for a ride to the top. The real troubles in life happen when those hidden doors stay closed for too long.”

Don’t let those hidden doors stay closed for too long. Let Yes be the answer – then your doors will open to the dreams of things that never were, and you too will say “Why not?”