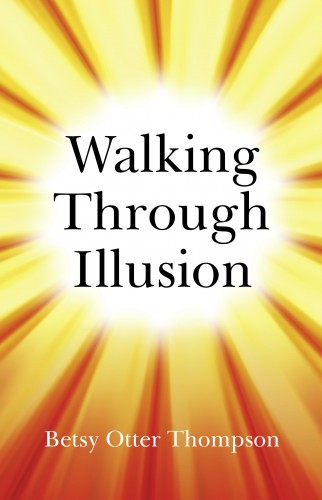 The series on Spirituality continues today with a guest appearance by author Betsy Otter Thompson, who has agreed to allow a chapter from her new book, Walking Through Illusion be excerpted on the Low Density Lifestyle website.

Betsy Otter Thompson is the author of a few books, including The Mirror Theory: The Way to Inner Peace, Resolution, and Transformation; Loveparent: How To Be The Parent You Hope To Be; and Lovehuman: How To Be Who You Love .

A Philadelphia native with a B.F.A. from the University of Pennsylvania, Betsy worked as a commercial print model and acted in television commercials in Philadelphia and New York. From 1987 to 1999, she worked in Los Angeles at the motion picture and television company Castle Rock Entertainment as the Assistant to the Chairman and CEO. In August ‘99, she followed her boss to Warner Bros. and became his Executive Assistant, as he assumed the position of President and COO, and stayed until she retired in 2005. Betsy is now writing full time.

Today we begin with the Preface to her book. Next time will be the chapter excerpt.

The heart is a magical organ. It pumps steadily or unsteadily according to how it’s treated. If we ask too much of the heart it gives off little signals warning of strained love. When the signals are ignored, the heart simply quits; not so different from other motors that aren’t well maintained.

What does it mean that hearts are free to express from the depth to which they go? It means that each of us is free to love in face of reasons not to. If we decide to love, the heart goes deeper to reveal our true identity. If we decide not to love, more opportunities arrive through which to challenge us to do so.

I receive my inspiration the same way an artist receives a vision or a musician receives a melody. I can’t tell you how it happens; I’m not sure myself. But if I asked an artist how she received her visions, or a musician how he received his melodies, wouldn’t they say something like this: I open my heart, feel what I need to express, and use my talent to do so. The same is true for me. I open my heart, receive a feeling, and let it express through my gift.

Inspirational writers have different ways of explaining their experiences. Some call it channeling, some call it the joining of conscious energy with the higher self within. Another calls it “a nonphysical energy present in all things that are physical.” (Abraham-Hicks Publications–September 16, 2008)

To me, it is the merging of energy. And, in this sense, my energy is merging with that of Jesus’. When we are together, the best in me is revealed. We all have inspiration to access since we all have hearts that can feel. How it is shared is as individually defined as the individual lives we are living. From the information shared with me, I believe that a few kind words to another are just as powerfully felt as the creation of a symphony.

My particular gift forces me to acknowledge the physics of action/reaction and the power it wields emotionally in every part of my life. When I first explored these physics–or the pulling of energy back to itself–I saw how it worked in the lives of those around me, e.g., an emotional action was taken by someone I knew, and I saw how it all came back to her through another. When I asked Jesus for an explanation, he said that she was receiving the mirror of her behavior.

When it came to my life, and how this theory was playing itself out, I denied my culpability, or the possibility that I had given the pain I had received. Had I been that cruel–and even if I had been, hadn’t my reasons been justified?

It didn’t take long to realize that justification carried no weight in the science of perfect balance. Excuses couldn’t change the course of the boomerang. Once it left my aura, it was on its path to others who were justifying their cruelty. In terms of the past and the pain I had created, that was not a happy thought. In terms of the future and the love I hoped to generate, it was empowering.

For the physics of action/reaction to be a viable theory, I had to acknowledge that equal justice prevailed in both directions (whether I liked what I received or I did not). But the more I enacted in positive ways and enjoyed the results that followed, the more I tested the power of physics in areas more demanding.

To me, demanding meant the depth to which I was willing to go to admit the pain I had given. Not easy. Who wants to admit to behavior in oneself that she has criticized in another? But as I faced my actions honestly and acknowledged the pain I’d attracted, I realized that I controlled receivership–at least in terms of emotion. This put me in the powerful position of creating what I preferred.

Awareness of action/reaction deepened my exploration of unresolved emotion. I have lapses now and then–more frequently than I like to admit. They occur when I blame others for the backlash I dislike.

Walking through Illusion is not the usual format for historical reenactments, but like any novel, it is the author’s interpretation of possible emotions that might have been experienced. The message is the gift, whether the history is taken literally or not.

Why were these particular people included in the story? I’m not sure. When the idea formed, some I chose consciously; some were chosen for me. As I wrote about these characters and the stories they had lived, I received page by page information that helped me to bring my own life into balance.

Early in the writing Jesus reassured me that the people in this book had lived their lives to the best of their abilities, just as I was doing. This revelation was important to me because, when I thought of them as somehow better than I was, a wall came up between their hearts and mine. When I remembered our oneness, the wall disappeared.

Before the writing began, I believed in a world of rights and wrongs. I saw the picture–or the view I saw with my eyes–as the measure of my existence. When the picture was awful, I thought I was helpless to change it.

Gradually, I learned that all my decisions had brought me growth in one way or another. I learned that taking responsibility for the love, or the lack of love in my life, was the tool through which to create a different life. My greatest hope is that you will sense your power from reading about these people and create the world of your desires.

The questions in this book arrived through the same process by which the answers came: the union of two hearts that had promised devotion to one another long before this journey into humanness began.

To introduce the format in this book, I offer the following conversation with my collaborator:

What did walking through illusion mean to you, Jesus?
It meant the process by which I brought a body into illusion to help me remember what was real: emotion, or the part of me that still remained when illusion fell away. Therefore, the challenge was to walk through every illusion with a grateful heart in the knowledge that love was the force that had gotten me here in the first place.

Why did your illusion seem so real if it wasn’t?
Because illusion was the game I was playing then. Compare it to an evening at the theater which, incidentally, was my entertainment of choice. Naturally, I became involved in the drama acted out on stage. In the context of that arena, the play was real. However, I knew that, eventually, I would leave the theater and carry on with my everyday reality.
The same could be said of my time here on Earth; it was a play as well. When the play was over, I left the theater in which the drama was happening and carried on with my new existence–which then became my reality.

How did the concept of illusion versus reality relate to the theater?
The theater was the illusion through which the play was happening; my response to it was real. When the drama was unfolding in the theater, I accepted that illusion for what it was. When the drama unfolded in my life, I sometimes blamed others for the way the play was progressing.
I played a role the same as my friends played a role, and the same as the actors in the theater had played their roles–and all of us had chosen the parts we played. Our roles were no more real than the ones we saw in the theater. They were illusionary experiments to expand our hearts so that when we left those dramas, we had the needed emotion for the next performance taking our hearts even deeper.

Were the plays of your friends always valuable?
Their souls must have thought so or they wouldn’t have had them in them. When the drama was over, they reviewed their scenes, found the growth from living them and moved on to the next play that would further enlighten their souls.

Did everyone achieve the growth they sought?
Some did; some didn’t. It all depended on how they viewed the play–whether they took responsibility for their autonomy, or blamed others for the scenes they didn’t enjoy.

How could they further their autonomy?
By having faith in their journey; it was designed for inspiration. Without it, their souls would have been seeking a similar production anyway. The value they gave their play was the value attracted back. If they didn’t like their audiences, they had to value differently. Each and every person had a mind that could think independently and, thus, a mind that could recreate until the mirror they loved was present.

Before they arrived to live their roles in this drama, their souls decided when to join the play and when to exit the play. If they shared the love in their hearts as they went from scene to scene, eventually they walked off stage, right into the heart of God forever.

To be continued next time…