Home Action The Roe-Volution is Coming!

Not too long ago, I did an interview with Heidi Sieck, civic entrepreneur and feminist activist, for my Interviews with the Leading Edge video interview series.

Heidi is Co-Founder/CEO of #VOTEPROCHOICE and most recently the founding Chief Operating Officer of Democracy.com and Civic Hall.

The 45th anniversary of the Supreme’s Court’s decision on Roe v. Wade is today, Jan. 22, 2018, and in support of that, Heidi’s organization, #VOTEPROCHOICE , is launching a “ROE-VOLUTION” to commemorate this.

Here is more information on this, from #VOTEPROCHOICE:

Heidi Sieck, Co-founder and CEO of #VOTEPROCHOICE believes the ROE-volution campaign will drastically shift the political narrative that prochoice champions cannot win in red or even purple areas. 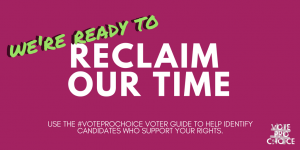 “We’re singularly focused on taking out democrats who fail to protect reproductive freedom or antichoice politicians hellbent on restricting abortion access and vital healthcare services,” said Sieck. “Last year we saw powerful prochoice victories in Georgia, Alabama, North and South Carolina and Virginia. What we now know to be absolutely true is that we can flip any district when we talk openly about reproductive rights.”

On the 45th Anniversary of Roe v. Wade (January 22nd), #VOTEPROCHOICE’s ROE-volution launches with an open call for progressive prochoice candidates across the country to seek the group’s endorsement.

Since 2016, #VOTEPROCHOICE has worked tirelessly to elect prochoice candidates at every level of government. As part of the 2017 resistance movement, #VOTEPROCHOICE endorsed 60 candidates, sent out over 3 million #VOTEPROCHOICE Voter Guides, texted with over 200,000 voters to help turn out the prochoice vote in elections from school board to statewide judicial races. Sixty percent of our endorsed candidates were elected.

Sieck continued, “By launching boldly into 2018 we will prove what we know to be true—America is a prochoice nation. When candidates lead on reproductive rights they win. The resistance is clearly eager to see more wins and we’re ready give them the chance with high quality prochoice champions who will really fight for the well being of everyone.”