There was a major victory over the last few days in the U.S. for anyone who cares about food quality and the alarming perversion of food and what we eat. It was landmark and revolutionary in nature, and just goes to show: the Revolution towards a more holistic, sustainable and enlightened world is marching on.

In essence what happened was that Big Food and its partners, the biotech companies – especially Monsanto – got whupped. After spending hundreds of millions of dollars over the last few years to block the labeling of foods that are genetically modified from being labeled as such, they have been cornered and are having to admit they are defeated.

It’s a victory for the people!

Currently, 64 countries around the world require labeling of genetically modified foods. Unlike most other developed and less developed countries – such as 28 nations in the European Union, Japan, Australia, Brazil, Russia, China, Kazakhstan, Saudi Arabia, Kenya, Cameroon, and Vietnam – the U.S. has no laws requiring labeling of genetically modified foods.

Why is that? Because Monsanto and the Big Food companies are afraid that if the foods were labeled in the U.S. as containing GMOs, then people may not want to eat them. Monsanto and their cadre claim GMOs are safe, and are happy to point to research that they have bought and paid for that supports their claim.

But Big Food, Monsanto and their allies kept beating it down in the U.S. Every time a state had it on their ballot to make it legal to label GMOs, Big Food would mobilize into action and scare voters into defeating the measure.

But the good people of Vermont weren’t afraid. In May of 2014 the governor of Vermont signed a GMO labeling law that is set to go into effect as of July 1, 2016.

A month after the law was signed, the state was sued by the Grocery Manufacturers Association, the food-industry trade group that had been leading the charge against state labeling efforts. The suit argued that the law violates its First Amendment rights and interferes with interstate commerce, and pushed the court to stop the measure from taking effect. A federal district court rejected the industry’s request for an injunction, and a ruling on an appeal is still pending. 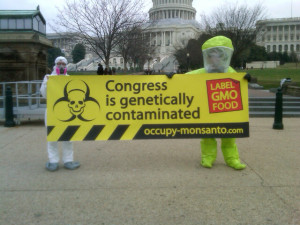 The next step for Big Food was to get their allies (meaning Republicans) in Congress to do something. Republicans in Congress spent this past winter garnering support for a law that would pre-empt all state GMO labeling laws. Their hope was to set a standard for GMO labeling that states couldn’t exceed—and which would be voluntary, not required. In theory its supporters called the bill precautionary; in practice it had one immediate effect in mind: stopping Vermont.

On this past Wed., March 16, 2016, it all came to a head as the bill came to the Senate floor –  and the winner was Vermont and people everywhere! Supporters of the bill to stop Vermont’s mandatory GMO law from going into effect mustered only 48 votes to limit debate—far short of the 60 they needed to move it through the Senate.

And so, Big Food, Monsanto and their ilk have been blocked. And then, to rub salt into their wounds, one of their cadre threw up the white flag two days later.

On Friday, March 18, Big Food company General Mills announced it will start labeling its products that contain genetically modified ingredients in response to the Vermont law. And not just in Vermont, but nationwide.

General Mills, the makers of Cheerios, Yoplait and Betty Crocker, among other foods, joins the Campbell Soup Company, which announced back in Jan. that they would start labeling which of their products contains GMOs, as companies that have decided that consumers do have the right to know whether what they buy contains GMOs. .

And you know what? Other food companies are going to fall in line, and soon.

Indeed, this was a major victory for the common good, as opposed to corporate interests. The Revolution marches on!

It doesn’t matter how bought and paid for some politicians are, and how much of an oligarchy we live in. As more and more people choose to live in the world our hearts know is possible, that world is going to come to fruition.

And it will be happening soon. Mark my words.