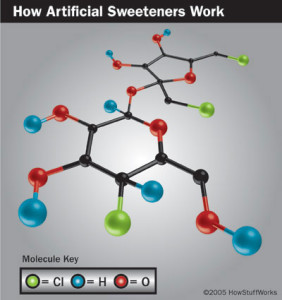 Today I want to tell you about another of the five. This one is Sucralose.

Sucralose is the most popular nonnutritive sweetener on the market. It is most well known for its claim to be made from sugar. It is as sold as Splenda and is 600 times sweeter than sucrose (table sugar). It provides essentially no calories and is not fully absorbed. In 1998 it was approved for limited use, and in 1999 it was given approval for use as a general-purpose sweetener. It is currently found in over 4,500 products, including foods that are cooked or baked.

Splenda has replaced aspartame as the #1 artificial sweetener in foods and beverages. Aspartame has been 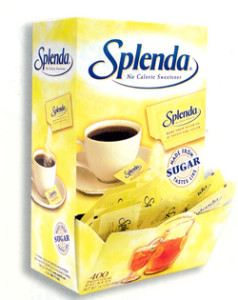 forced out by increasing public awareness that it is both a neurotoxin and an underlying cause of chronic illness worldwide.

A lot of the controversy surrounding sucralose stems from the fact that it was discovered while trying to create a new insecticide. The claim that it is made from sugar is a misconception about the final product.

Sucralose is made when sugar is treated with trityl chloride, acetic anhydride, hydrogen chlorine, thionyl chloride, and methanol in the presence of dimethylformamide, 4-methylmorpholine, toluene, methyl isobutyl ketone, acetic acid, benzyltriethlyammonium chloride, and sodium methoxide, making it unlike anything found in nature. The Splenda Web site even states that “although sucralose has a structure like sugar and a sugar-like taste, it is not natural.” The product Splenda is also not actually calorie-free.

Sucralose does have calories, but because it is 600 times sweeter than sugar, very small amounts are needed to achieve the desired sweetness. The first two ingredients in Splenda are dextrose and maltodextrin, which are used to increase bulk and are carbohydrates that are not free of calories. One cup of Splenda contains 96 calories and 32 grams of carbohydrates, which is substantial for people with diabetes but unnoticed due to the label claiming that it’s a no calorie sweetener.

The name sucralose is another misleading factor. The suffix –ose is used to name sugars, not additives. Sucralose sounds very close to sucrose, table sugar, and can be confusing for consumers. A more accurate name for the structure of sucralose was proposed. The name would have been trichlorogalactosucrose, but the FDA did not believe that it was necessary to use this so sucralose was allowed. 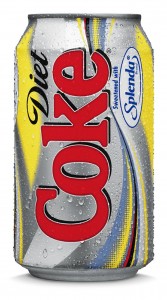 The presence of chlorine is thought to be the most dangerous component of sucralose, as chlorine is a carcinogen. Splenda/sucralose is simply chlorinated sugar, which is a chlorocarbon. Common chlorocarbons include carbon tetrachloride, trichlorethelene and methylene chloride, all deadly. Chlorine is a highly excitable, ferocious atomic element employed as a biocide in bleach, disinfectants, insecticide, poison gas and hydrochloric acid.

In test animals Splenda produced swollen livers, as do all chlorocarbon poisons, and also calcified the kidneys of test animals in toxicity studies. The brain and nervous system are highly subject to metabolic toxicities and solvency damages by these chemicals.

and the immune function. Thus, chlorocarbon poisoning can cause cancer, birth defects, and immune system destruction. These are well known effects of Dioxin and PCBs, which are known deadly chlorocarbons.

Sucralose has also been found to shrink thymus glands (the biological seat of immunity).

So there you have it about Sucrolose and its brand name Splenda. If you want to experience good health, then by all means stay away from Sucralose.