ROOTED in PEACE is a brilliant film that is showing Nov. 17 at 7pm at the Dee Sarno Theater at the Saratoga Arts Center, 320 Broadway, in Saratoga Springs, NY.

You can register for the film here: Rooted in Peace 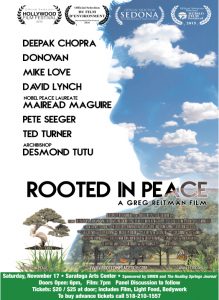 Rooted in Peace is a film that challenges viewers to examine their values as Americans and human beings. Today we are at war within ourselves, with our environment, and with the world. Director and award-winning filmmaker Greg Reitman invites viewers on a film journey to take notice of the world we live in, proactively seek ways to find personal and ecological peace, and stop the cycle of violence.

In Rooted in Peace, filmmaker Greg Reitman learns from all of them, and heeds Maharishi Mahesh Yogi’s words, that if the forest is to be green, every tree must be green; if there’s going to be Peace on earth, then everybody needs to experience that quality of Peace within themselves. And so in asking viewers to do the same, Reitman poses the basic question: How do we want to live? Reitman’s journey is an example of transformation — how one person can learn to make the necessary changes to enjoy a better life — and in so doing inspire others to want to improve their own lives, and society as a whole.

The movie “Rooted in Peace” has a special showing in Saratoga Springs, NY on Saturday evening, November 17, 2018 at the Dee Sarno Theater at the Saratoga Arts Center, 320 Broadway. You can see the trailer to the film above.

The doors open at 6pm for this festive event, with the film beginning at 7pm. Admission is $20 in advance and $25 at the door, and the admission price includes, in addition to the film, free organic refreshments, bodyworkers offering treatments, and a panel discussion after the film.

You can register for the film here: Rooted in Peace