Home Action Prince – and the Revolution

Prince Rogers Nelson, the genre-bending musical genius and visionary, sadly passed away recently, on April 21, 2016 at the all too-young age of 57.

He was a singer, songwriter, multi-instrumentalist, record producer, and actor, and was a musical innovator known for his eclectic work. His music integrated a wide variety of styles, including funk, rock, R&B, soul, psychedelia, and pop, and sold over 100 million records worldwide, which made him one of the best-selling artists of all time. He won seven Grammy Awards, a Golden Globe Award, and an Academy Award for the film Purple Rain.

Prince also had his hands in the social and political realm. He partnered up with the noted political and environmental activist Van Jones on a number of projects: Prince conceived and launched YesWeCode, an initiative aiming to teach 100,000 low-income kids to write code, and helped fund Green for All, an organization co-founded by Van Jones, whose stated goal is to build a green economy while simultaneously lifting citizens out of poverty.

Prince also supported Van Jones’ advocacy project called Rebuild The Dream, which aimed to “give the progressive mass movement that rose up to elect Barack Obama a new banner to march under.” In August 2012 Prince announced a series of concerts in Chicago to support Rebuild the Dream, and Prince went on The View with Van Jones and Rosario Dawson to promote the concerts.

In other words, Prince was a visionary, along with being a musical genius. He was born to musician parents, so it might be that Prince was born with the gift of music. But Prince also had a vision of the world in which he understood that there are no limitations or boundaries.

As Prince himself said, “A strong spirit transcends rules.”

At one time, Prince’s band was called Prince and the Revolution. And indeed, that attitude, that a strong spirit transcends rules, is not only revolutionary in nature, but is the Revolution that is blowing the winds of positive change in our society and world, and moving our world towards an open culture and one that is more holistic, sustainable and enlightened.

Prince had a strong spirit and broke the rules by being such a holistic and integrative thinker – a polymath – by virtue of his crossing boundaries and defying genres with his music, and with his social initiatives.

But then there are other rules that are artifices, in place due to peer pressure and tribal behavior patterns that carry the expectation to conform to the norm. These rules stifle innovation in the name of not rocking the boat.

Yet, all the great innovations and ideas and new ways of doing things have been created by people who transcended rules. It was George Bernard Shaw who said, “The reasonable man adapts himself to the world; the unreasonable one persists in trying to adapt the world to himself. Therefore all progress depends on the unreasonable man.”

Gordon Parks was another example of someone who transcended the rules. When he died in 2006 at the age of 94, he had a long list of accomplishments: photographer, musician, composer, journalist, novelist, nonfiction author, screenwriter, film director, choreographer, and political, cultural and social activist. Gordon Parks lived a full and rich life and did many varied and incredible things that enriched the lives of countless people.

The thing about Parks was that he had severe impediments to overcome. He was born into a poor black family in a segregated small town in Kansas, and was the youngest of fifteen children.

He began his career as a self-taught photographer at the age of 25, and then bounced around in jobs as a photographer. He landed at Vogue, then Life magazine, and then branched out into writing. From there he became a film director, directing an autobiographical novel, and then directed the hit 1971 film Shaft. But Parks didn’t stop there. He began writing novels, and having taught himself piano, composed symphonies. He even wrote and choreographed a ballet in 1989 that was a tribute to Martin Luther King, Jr.
Gordon Parks said the theme of all his work was, “Not allowing anyone to set boundaries, cutting loose the imagination and then making the new horizons.“
Gordon Parks in essence was saying the same thing Prince said, that strong spirits transcend rules.
This, then, is the Revolution: the realization that we are all strong spirits and that we can transcend rules, and by doing so, change our life, change the lives of others, and change the world.
So why is it that we hold ourselves back? Prince surely didn’t, and neither did Gordon Parks. 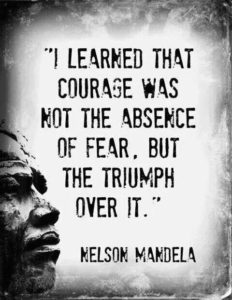 It takes courage to transcend rules, but the good news is that there are more and more people who are doing so, which puts you in good company. It takes a certain amount of courage to think different, to see the world from the vantage point of vuja de, and to open up to the world of new possibilities, and as more and more people are doing so and joining in this Revolution, it makes it easier for the rest of us to also do so.
That’s what Prince did. And his impact was revolutionary in nature.
We are all capable of being revolutionary in nature – it means not accepting the status quo because of the mentality that says, “that’s just the way it is and has been for many years”; instead it means you question the status quo and start to think about whether there are better or alternative ways of doing things.
That’s what all the great spirits, creators and innovators have done throughout time, and what you can do too.
Have you read Michael Wayne’s new book “The Quantum Revolution: The Power to Transform?” If you haven’t, you owe it to yourself to do so, as it’s a book that promises to help ignite the movement that is sweeping our society and world, a movement that can usher in a more holistic, sustainable and enlightened world. Go to this link to get your copy now!: The Quantum Revolution: The Power to Transform