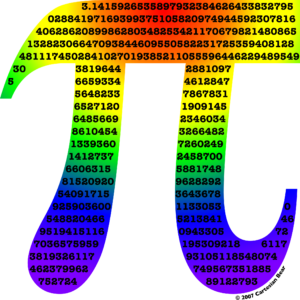 Pi, the ratio of a circle’s circumference to its diameter, is one of those things in life, if you take the time to ponder it, that can leave you awestruck – even if you’re not a geek (which I profess to be).
Pi has taken its place in the pantheon to such a degree that in 2009 the U.S. House of Representatives officially recognized March 14, 2009 as the first official National Pi Day, with every subsequent March 14 continuing in the same way.
And while your mom may take that day as an opportunity to bake you an apple pie, it’s a different Pi a la mode that is served up that day.
Why March 14? Pi’s shorthand is written as 3.14 – hence March 14 being recognized as Pi Day – and its most common designation appears as 3.14159.

Pi: Irrational or Not?

Just as Rust Never Sleeps, as Neil Young sang, Pi never ends, and at last count it was found to have 13 trillion numbers. It is thought to be an irrational number, which is one that continues forever without any repeating pattern. But it is not irrational, because like everything in the universe, there is an order to it, a deep underlying structure and pattern to its seemingly random configuration.
For example, at position 768 in the Pi digits there are six 9s in succession. This block of nines is famously called the “Feynman Point” after the Nobel Prize-winner Richard Feynman. The chance of this block happening if Pi is truly random is 0.08%. And at position 17,387,594,880 you will find the sequence 0123456789. Furthermore, if you dig deeper into the Pi, more patterns show up.

There has always been an interplay in our universe between randomness and the structure of underlying patterns, and although there are things that are pure random, the great majority of what seems to be randomness is instead part of nature’s hidden design.

Order arises out of  chaos, chaos theory informs us. Order arises out of chaos because of the fact that nature has an inherent self-organizing principle – whenever something steers off course, life will eventually self-correct. This self-organizing principle moves towards what is true, good and beautiful: higher, more complex, more evolved, and more sophisticated levels of order.
This is a law of evolution, that life moves towards more elaborate structures and patterns of order, towards levels that contain greater potentials. To see this self-organizing principle occur though, we have to be willing to let go and surrender. We have to remain open to what nature may bring forth.
That doesn’t mean we sit passively and just let things take their course. Action is necessary to assist the self-organizing principle to carry forward, but at the same time we need to cede control to allow nature’s laws to progress.
The self-organizing principle is an inherent and innate drive. It is how aspects of life come together, disperse, and then reform to a greater order, whether they are ant colonies, urban environments, human behavior, life’s stresses, political landscapes, or how our bodies heal. There is always an underlying pattern to what may seem to be randomness and chaos.
I’d be the first to say that in our current political climate here in the U.S., that we can’t just passively sit around and let nature take its course. There is too much at stake to not be an active participant in making your voice heard.
But at the same time, if you let the current negative climate overtake you by feeling you have to always be active and do something, this dark energy will engulf you. Nature carries out the self-organizing principle in an open environment, where things are allowed to progress without impedance, without interruption. If the dark energy becomes embedded in your psyche, it will create an impedance in the flow.
Self-organizing principles, and nature’s underlying patterns, may be an inherent fact of life, but too much human activity can break the chain. When we spray pesticides on an ant colony, we can destroy the self-organizing behavior of an ant colony, because the toxicity of the pesticides will cause the ants to wither and die, thereby putting a cessation to their instinctive drives.
And when we get sick, run to the doctor and then start taking drugs, we are disrupting the body’s own natural rhythms and blocking the self-organizing aspects of the body’s innate healing capabilities.

The Heart is Nature’s Greatest Self-Organizer

Innate healing emanates from an open heart, and an open heart that can give and receive love is nature’s greatest self-organizer.
What causes us to not listen to nature’s rhythms and impede the heart and self-organizing principle from taking effect?
Fear.
Fear of the unknown. Fear of uncertainty. Fear of our own shadow. Fear of the “other.” Fear of our own unexpressed emotions. And a million other fears. Fear is a dark energy of infinite shape and size that can consume you by feeding you lies and distortions. Fear is a learned and conditioned trait, and it’s what stops our own natural resonance with the flow of nature, with the self-organizing principle.
Pi is a great teacher to help you understand this. Beneath that seemingly endless, 13 trillion number long, irrational hodgepodge of digits is a sparkling, magnificent, scintillating array of figures that is telling you that yes, you, have an inherent order within. There is a pattern that guides you each and everyday, even if you don’t comprehend its underlying message.
Your heart knows.
Action and surrender, the yin and yang of enlightened living, are the lodestars that can help you gain shelter from the storm. And with an open heart, your sanctuary will be there for you, helping you to understand nature’s hidden messages that lie beneath the surface, under what appears to be pure randomness and chaos. Your heart, the greatest self-organizing principle of them all, will always be your guide and ally.