Home Culture/Arts Obesity: A Problem for the Whole Wide World

Obesity is the health issue of our modern times, and it is a global epidemic – there’s no mistaking it. Although the U.S. is the world’s leader in percentage of obese people, it is far from the only country in the world with a glaring problem.

And as I’ve pointed out, the main culprit in the obesity epidemic is the modern diet, and in particular white flour, refined white sugar and high fructose corn syrup, along with the consumption of soft drinks and fast food.

One other food product that can be directly related to obesity is the growth hormones that are fed to animals – the meat that is then eaten by people. Eating animals that have been artificially bulked up can cause the consumers of these foods to also become bulked up.

Obesity in the U.S. 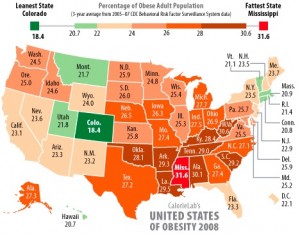 In the U.S., the number of obese and overweight children has climbed to over 30 percent in 30 states, a troubling trend that could signal decades of weight-related health problems such as cancer, diabetes and heart disease as these children become adults.

The U.S. Centers For Disease Control says that one in three American children born in the year 2000 will go on to develop diabetes.

But the same is seen all around the world. A woman I know who has been visiting Scotland since the 1970’s said when she first stayed in Scotland, there were no obese people she ever saw. Now she says she sees it everywhere when she goes.

And the cause, in her mind, is the proliferation of fast food establishments there.

Metabolic Syndrome is the Obesity Problem 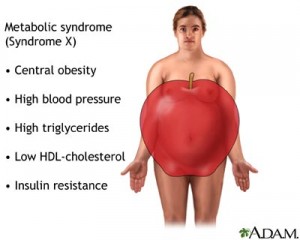 The physiological cause for this is a syndrome that creates accelerated aging and disease. Its name is Metabolic Syndrome and the amount of people it is affecting is reaching epidemic proportions.

Metabolic syndrome is a complex health condition that affects an estimated 25 percent of Americans, and most probably a similar amount around the world.

According to the U.S. National Institutes of Health, the chances of developing metabolic syndrome increase if you have three or more of the following symptoms:

Obesity in Other Countries

The U.S. continues to lead the way, with as many as 37% of its children and adolescents carrying around too much fat. But other countries are rapidly catching up.

According to statistics, more than 20% of European youngsters between the ages of 5 and 17 are either overweight or obese. Children in North Africa and the Middle East aren’t far behind. 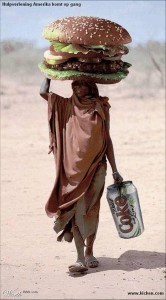 Across Asia too, childhood obesity is on the rise, and the trend has been documented even in urbanized areas of sub-Saharan Africa, which until recently was the one place in the world where obesity rates were low.

Among the most obese people on the planet are the inhabitants of the South Pacific island of Nauru, who — thanks to a surfeit of cheap, calorie-dense foods, along with a shift away from jobs requiring physical activity — have the unwelcome distinction of being some of the fattest, most diabetes-prone people on the planet.

Unfortunately, the Nauruan experience, while extreme, is not unique. Asia may lag behind the U.S. and Europe in its obesity statistics, but Thailand, Malaysia, Japan and the Philippines have all reported troubling increases in recent years.

In China, where a one-child-per-family policy has created millions of spoiled and overnourished children (feeding a phenomenon known as little-emperor syndrome), the rise in childhood obesity is particularly alarming. Up to 10% of China’s 290 million children are believed to be overweight or obese, and that percentage is expected to have doubled a decade from now.

Imagine this. What does this bode for the future? A world of people who are extremely unhealthy and putting a strain on medical services and medical budgets.