Home Consciousness Love Is But the Song We Sing, and Fear’s the Way We Die

The title of this post, “Love is But the Song We Sing, and Fear’s the Way We Die,” comes from the classic 1960’s song “Get Together” by the Youngbloods.

You can watch the video with the lyrics above.

Some might dismiss this as a 1960’s utopian peace, love and granola song, but the words ring true decades later:

We may differ in skin color, appearance, gender, sexual orientation, cultural values, religious values, the way we dress, etc., but these are just the outer layer of our shell.
On the inside, we are all the same and we all share similar values: the desire to love and be loved, to commune with others, to feel appreciated, to be heard, to be understood, to live happily and to live freely.
You hold the key to love and fear
All in your trembling hand
Just one key unlocks them both
It’s there at your command
How can we understand one another when we’re so ready to castigate, and injure, one another over our differences? And it is this castigation that has led to the sectarian strife we see in the U.S. and all over the world at this point in time.
One day, many years ago, I was standing with a group of friends on a street in New York City. A cop walked by and said to me, “Hey, how’s it going? Things ok?” I didn’t know this cop and his friendliness unnerved me. I said back to him, “I’m doing ok, thanks.” And then I asked him, “Do you know me?” He said back, “Sure, I locked you up a couple of months ago.” I replied to him, “No, officer you did not, and I don’t know you.” The cop said to me, “I’m sorry, you look like someone else.” I then asked him, “Are you always this friendly with people you arrest?” And he said, “Yeah, I always try and make friends with the people I arrest and try and help steer them on the right path.”
I’ll never forget the kindness that police officer showed me, even if it was a case of mistaken identity. And I’ll never forget what he said, that he desired to make friends with the people he arrested. 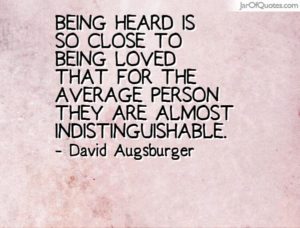 We have to listen to one another, because that’s what anyone wants, to be heard. If someone is in pain, they want to be heard. They may lash out at others, but if they feel like they’re being heard and that someone understands their pain, there’s a good chance they won’t lash out or hurt anyone else.
A few years back, two Iraqi men came to see me for acupuncture. They had been living in the U.S. a few years, having fled their country after the U.S. invaded Iraq and tore their country apart. The two men didn’t know each another in their home country and instead met in the U.S., but now they were like brothers. One of the men told me that when he met the other, he felt a lot of tension and anger well up inside of him, because he was a Sunni and the other man was a Shiite. In Iraq, Sunnis and Shiites are mortal enemies, but having met in the U.S., and away from their cultural biases, they were willing to get to know and understand one other, which allowed them to become like brothers.
I think of all this because I just read an article about a cookout that took place in Wichita, Kansas on Sunday, July 17 that was co-hosted by the local police department and the local Black Lives Matters organization.
Here’s a tweet with pictures that came out of the event:
amazing nite as Wichita law enforcement teamed w/#BlackLivesMatter for cookout instead of protest. Hugs not hate!

At the event, dubbed the First Steps Cookout, the police ended up cooking more than 2,000 hamburgers and 2,000 hot dogs (my own personal preference would have been to see some vegetarian fare also). Using the hashtag #ThatsMyWichita, hundreds of images of officers, activists, elected officials, and ordinary civilians were shown dancing, playing basketball and chowing down.

Wichita Police Chief Gordon Ramsay said during the cookout, about his city’s police department: “Loud and clear I have zero tolerance for racial profiling or racial bias. If you feel mistreated, I want to know about it.”

Love is but the song we sing, And fear’s the way we die.
We just have to understand one another. We are more similar than different. Listen to others, hear them, hear what they want, understand them.
You hold the key to love and fear
All in your trembling hand
Just one key unlocks them both
It’s there at your command
Have you read Michael Wayne’s new book “The Quantum Revolution: The Power to Transform?” If you haven’t, you owe it to yourself to do so, as it’s a book that promises to help ignite the movement that is sweeping our society and world, a movement that can usher in a more holistic, sustainable and enlightened world. Go to this link to get your copy now!: The Quantum Revolution: The Power to Transform