Home Consciousness How to Brainwash Your Monkey 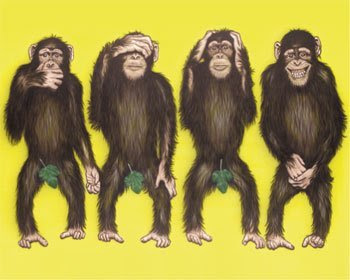 In a recent article I wrote, “The Nonsense and Delusions People Believe As Truth”, I talked about the ridiculous and nonsensical things people believe, within the context of this year’s U.S. presidential campaign and specifically among supporters of Donald Trump.

Trump supporters have been making statements that fly in the face of truth, saying such things like:

None of these are true and only exist in the minds of people who are letting their emotions cloud their judgment.

As I also pointed out in my recent article “Adolf Hitler and Donald Trump: Soul Brothers,” this inability among Trump supporters to separate fantasy from reality is not something new: Adolf Hitler carried out the same type of campaign that sowed doubt and confusion in his follower’s minds, and this campaign allowed him to seize power.

This is the essence of propaganda, whether for the benefit of a demagogue or product: to get people to fall under the sway of an illusion, one that creates such doubt and confusion in a person’s mind so that the person falling under the sway of this illusion is incapable of telling which end is up or down.

But we also fall sway under the illusion of the stories we tell ourselves, and when we do so we then identify with these stories, an identification that causes us to move far away from the truth of who we truly are.

I was reminded of the illusion we create for ourselves not too long ago, when I went to the theater to see the musical comedy “9 to 5.” Based on the hit movie of the same name, the play tells the story of three women who work in an office dominated by a horribly misogynist boss.

The boss has a female employee on his side, Roz, who is his eyes and ears around the office and snitches to the boss when she hears of female employees complaining about the boss or enacting out plans to get revenge on the boss.

In the musical, Roz has a solo in which she sings out her delusions, confessing her obsessive love and fantasies for the boss, and seeing herself becoming his wife (although the boss is already married). The boss is just using her to snitch on the other women, but Roz has convinced herself of a lie, that the boss loves her and needs her, and in the story Roz tells herself, the boss can’t live without her, or she him.

But this is all just a fantasy that Roz has created in her mind, and sadly, this illusion gives Roz not only her reason for living but also her motivation for betraying her female colleagues.

And therein lies the crux of the issue: it is the stories we tell ourselves that create an illusion of who we think we are and impede us from knowing who we truly are or who or what we can become. We start telling ourselves stories that have no basis in truth: whether it’s that Bill Clinton got AIDS from Magic Johnson, Hitler would make Germany great again, eating sugar is part of a healthy diet, the dysfunctional relationship we are in will work; or whatever it is that you have convinced yourself to believe.

This is the essence of brainwashing – and how propaganda works: when ideas get repeated enough times they then become accepted as facts. It doesn’t matter if someone else is repeating the ideas that you then believe, or if they are ideas you are telling yourself. Either way, they create an illusion that clouds your mind and judgment and prevents you from truly knowing yourself and living in the truth of your existence.

The great Indian philosopher Jiddhu Krishnamurti once said, “Do not repeat after me words that you do not understand. Do not merely put on a mask of my ideas, for it will be an illusion and you will thereby deceive yourself.”

That’s what Roz did in 9 to 5, convincing herself that it was worth snitching on her fellow oppressed female workers, because her boss loved her (and she him) – which was a complete fantasy on her part.

What story or stories do you tell yourself?