Home Health And Wellness Herbal Approaches to the Swine Flu 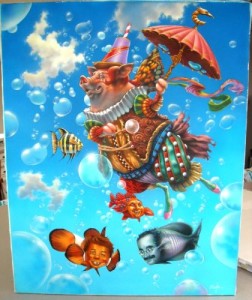 I’ve been talking about herbal medicine for the last two weeks, and to close the series I want to take a look at if there could there be herbal remedies for the swine flu.

The swine flu, also known as the H1N1 virus has been getting a lot of press in 2009, ever since an outbreak began in Mexico in the wintertime.

This is not the first appearance of the H1N1 swine flu virus. Swine flu was first identified in the flu pandemic of 1918, and since then it has remained a strain that rears up from time to time.

The influenza virus is actually quite common in pigs.

So, in other words, the swine flu is nothing new. It’s just a different strain of the influenza virus.

And because viruses can mutate, sometimes at whim, it’s not always the best thing to try and eradicate it with drugs. Because by trying to destroy it with potent medications, the virus strain can mutate into something stronger and uglier. That’s where the herbal approach could be the wise thing to do. When an herbal remedy meets a virus, it doesn’t try to eradicate the virus as much as it tries to harmonize with it and help the virus to settle down, stop mutating, and ease off on its manifestation of symptoms.

To that end, there have been a couple of herbal approaches in the works to deal with the swine flu.

One is occurring In Mexico, where the Mexican higher education body the National Polytechnic Institute

(IPN) has reached an agreement with the Beijing-based China Medical University to cooperate in medicinal plants research as part of the efforts to contain the H1N1 flu outbreak.

Guillermo Perez Ishiwara, the IPN’s head of postgraduate studies and research, said Monday that herbal therapy could work to fight the flu strain that has killed 83 and infected 4,541 people in Mexico.

“We are seeking to find in the two herbal traditions plants that serve as anti-virals. Some of the components of the herbal formulas may stimulate the immune response, which mean they could become an alternative in preventing any outbreak that may come in winter,” he said.

“This is a virus that will emerge in a recurring manner and not just in the next winter season,” Perez said, urging researchers and scientists from several institutions to work harder and join hands to fight the virus.

Javier Grandini Gonzalez, director of the IPN’s National Medicine and Homeopathy School, said both Mexico and China are excellent in herbal medicine study.

And the second development is from a pharmaceutical company, Vanguard Pharmaceutical Corporation, that has recently produced a naturally derived product formulated to aid against strains of influenza by strengthening the immune system.

Called Swine Guard, the formula combines traditional Chinese medicine with many extracts that have proven to boost the immune system as well as offer many other benefits in the fight against influenza.

Swine Guard is formulated with:

Shikimic Acid, a traditional Chinese medicine to treat influenza and colds by strengthening the immune system and by functioning as an anti- inflammatory.

Echinacea Extract, which stimulates the immune system, prevents upper respiratory tract infections, is a mild antibiotic that fights strep and staph infections, and produces interferon which increases antiviral activity by improving the migration of white blood cells to attack foreign microorganisms and toxins in the bloodstream.

Microcrystalline Cellulose, which fortifies blood vessels, aids in the repair and maintenance of vital lungs, and improves the lymphatic system.

Ascorbic Acid, which is an antioxidant that enhances the immune system, helps regenerate wounds, protects against effects of stress, and helps prevent certain cancers.

Goldenseal Root Extract, which enhances the immune function, relieves stress, and is an energy booster.

Burdock Root, which purifies the liver, neutralizes most poisons, and detoxifies the system.

Licorice Root Extract, which treats sore throats and rejuvenates cells of the digestive system and liver.

And Shaitake Mushroom, Astragulus Root Extract, and Pau D’Arce Extract, all of which work to enhance the immune function.