Home Consciousness Healing the Divide in Ourselves

Not too long ago, I saw an interview with the filmmaker Lee Daniels, the director of such films as Monster’s Ball, Precious, and The Butler, along with the TV shows Empire and Star.

At that point in time, as Daniels further said in the interview, Philadelphia’s mayor was Frank Rizzo, a former police commissioner who had developed a reputation as being tough on crime. Rizzo’s relationship with Philadelphia’s black community was volatile, and many in and out of that community considered him a racist.

Yet here were Philadelphia police officers, in a city torn apart by racial strife, and a city experiencing racial baiting from a mayor with racist tendencies, at the funeral of one of their own, openly weeping and mourning their loss. There were no prejudices that day; everyone was united in their grief.

In a different situation, if the slain black officer was not a cop, the odds of white cops attending his funeral and grieving his death would have been nonexistent. The white officers would not have known this dead man, nor ever taken the time to get to know him.

Fear and the Brain

I wrote a prior article about Healing the Divide in America that looked at the partisan divide in the U.S. from the outside in. In that article I looked at the external forces that are tearing this country apart and causing people to become divided and separated from one another.

There is also a great divide in America that stems from the inside out. This is the internal force that is dividing and separating us.

The inside out divide that exists in America is rooted in how we “otherize” those who are different than ourselves. Those who look, act, speak and seem different than us are looked at with suspicion – unless we know them, as the white cops knew the slain black cop.

At the same time that we otherize those who are different than us, we also otherize ourselves. 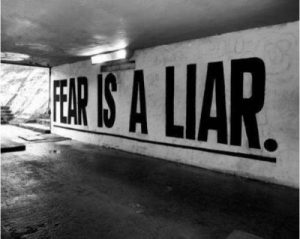 Fear is a dark energy of infinite shape and size that can consume you by feeding you with lies and distortions. Fear is both a learned and conditioned trait, and also a primal trait.

Fear drives us to go against our own best interests and stay locked in a corner, afraid to venture beyond the familiar. It causes us to stay with our tribe, and stay with the tried and true, even when the tried and true leaves us miserable, unfulfilled, unsatisfied, unhealthy, angry, resentful, frustrated, and countless other negative emotions and negative life situations.

Fear is rooted in the primal, reptilian brain, the part of our anatomy that is tasked with overseeing our survival. The reptilian brain exists in all living creatures and is responsible for species-typical instinctual behaviors involved in aggression, dominance, territoriality, and ritual displays. 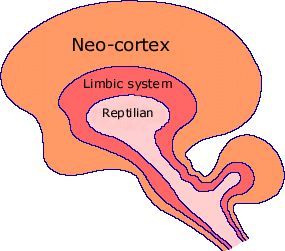 The last segment of the brain is the neocortex, and it is the neocortex that separates humans from other mammals. The neocortex first assumed importance in primates and has culminated in the human brain, with its two large cerebral hemispheres that play such a dominant role. These hemispheres have been responsible for the development of human language, abstract thought, imagination, and consciousness. The neocortex is flexible and has almost infinite learning abilities and has enabled human cultures to develop and thrive.

The neocortex allows a person to develop their thinking and cognitive capabilities and evolve to greater potentials. It helps us go beyond the limited primal behavior patterns of the reptilian brain, and the emotional roller coaster of the limbic system, to become more evolved human beings, capable of moving past survival instincts and emotion-based behaviors.

There would be no da Vinci, Beethoven, Picasso, Nelson Mandela, Sigmund Freud, Nikola Tesla, Steve Jobs, or any other brilliant and creative person who has enriched our lives, without the neocortex.

Obviously, we need our emotions, as it’s what helps us feel, love, and empathize. We also need the higher-level cognitive capacities that the neocortex supplies us with. It is when we integrate the two in a holistic way that the mind and heart can be unified, and the thinking and feeling body can be more connected. When this takes place, we stop being overwhelmed by our emotional and primal drives.

If the heart and mind are not integrated, a separation between the two will exist. This separation is caused by feeling overwhelmed by the emotional and primal drives. This sense of being overwhelmed leads to an internal disconnect in which we otherize not only ourselves but others.

When all is said and done, we are more similar than different. We all have the same desire for health, happiness, fulfillment, security, comfort and love – we all share a common humanity. Yet when we are overcome by the disconnect, we become separate from both ourselves and others, and the divide that exists between us just grows larger.

Stepping Outside the Comfort Zone 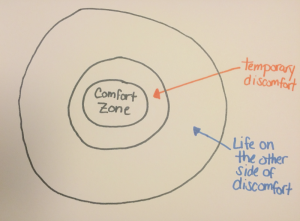 We have to take a chance and step out of our own comfort zone in order to feel more integrated within ourselves. This helps you get past the distorted story you have created about yourself. In turn, this then allows you to take the next step and reach out to those who are different than yourself – the people who get otherized.

In order to reach out to the “others,” we need to take a risk and get beyond our preconceptions of who this  “other” is. This preconception is just a story that you have created in your mind.

It was easy for the white cops to grieve for a black cop, as the white cops of Philadelphia did for the father of Lee Daniels, because he was one of them and there was no separation. You see how easy it can be?

How easy is it for you to talk to someone different? What preconceptions do you have of those who are different?

Self-Awareness and Healing the Divide

When we shut ourselves down and close the door to self-awareness, then the darkness of the reptilian brain and the emotional roller coaster of the limbic system become the prevailing forces.

And when we attempt to understand the drives, motives, fears and impulses of those who are different than ourselves, we can put ourselves in their shoes and act from a more compassionate, aware and evolved place.

Healing the divide in ourselves is not a hard thing. It just takes increased self-awareness, which allows for empathy, understanding, compassion and self-love. And when this occurs, we become not only more connected to others, but even more importantly, more connected to ourselves.

And this is how we change and heal not only ourselves but the world.