Home Health And Wellness Ginseng – King of the Herbs, Part 1 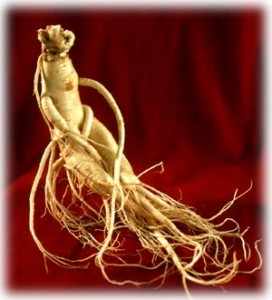 I’ve been focusing on herbal medicine in this series. The main point of this series is that incorporating herbal medicine into your medical needs can help you to reduce the need for drugs. And by doing so, you can become healthier and more in synch with living a Low Density Lifestyle.

In yesterday’s article I told you about 10 herbs that are good for stress. One of the herbs I mentioned in that article was Ginseng.

Today I will focus on Ginseng, which is known as the King of the Herbs.

Ginseng is part of the materia medica of Chinese Herbal Medicine, and is the most famous herb in the pharmacopeia. It has been valued for its remarkable therapeutic benefits for at least 7,000 years and was so revered that wars were fought for control of the forests in which it thrived.

An Arabian physician brought ginseng back to Europe in the 9th century, yet its ability to improve

stamina and resistance became common knowledge in the West only in the 18th century.

Ginseng is native to northeastern China, eastern Russia, and North Korea, but is now extremely rare in the wild and increasingly becoming endangered, due in large part to high demand for the product in recent years, which has led to the wild plants being sought out and harvested faster than new ones can grow (it requires years for a ginseng root to reach maturity).

In the U.S., there are woods grown ginseng programs in Maine, Tennessee, Virginia, North Carolina and West Virginia, and United Plant Savers has been encouraging the woods planting of ginseng both to restore natural habitats and to remove pressure from any remaining wild ginseng.

Chinese/Korean ginseng grows in northeast China and Korea, the coldest area known to many Koreans in traditional times. Thus, ginseng from there is supposed to be very Yang. Originally, American ginseng was imported into China via subtropical Guangzhou, the seaport next to Hong Kong, so Chinese doctors believed that American ginseng must be good for Yin, because it came from a hot area. However they did not know that American ginseng can only grow in temperate regions. Nonetheless the root is legitimately classified as more Yin because it generates fluids.

Most North American ginseng is produced in the Canadian provinces of Ontario and British Columbia and the American state of Wisconsin.

The form called white ginseng is grown for four to six years, and then peeled and dried to reduce the water

content to 12% or less. White ginseng is air dried in the sun and may contain less of the therapeutic constituents. It is thought by some that enzymes contained in the root break down these constituents in the process of drying. Drying in the sun bleaches the root to a yellowish-white color.

The form called red ginseng is harvested after six years, is not peeled and is steam-cured, thereby giving them a glossy reddish-brown coloring. Steaming the root is thought to change its biochemical composition and also to prevent the breakdown of the active ingredients. The roots are then dried.

Red ginseng is frequently marinated in an herbal brew which results in the root becoming extremely brittle. This version of ginseng is traditionally associated with stimulating sexual function and increasing energy. Red ginseng is always produced from cultivated roots, usually from either China or South Korea.

There are other plants that are called ginseng, but they are actually from a different family or genus. These include:

Tomorrow I’ll be back with more on ginseng, so tune in tomorrow.