Home Health And Wellness Drugs Ask Your Doctor: The Marketing of Drugs

In yesterday’s article, Drug Ads on TV – A Brief History, I laid the blame for the epidemic of exponential growth in pharmaceutical consumption in the U.S. to August 1997, when the FDA allowed drug companies to begin advertising on TV.

In the above video, Kathleen Slattery-Moschkau, a former pharmaceutical sales rep gives the inside dirt. Slattery-Moschkau, who since leaving the field has gone on to become a filmmaker, making the feature film Side Effects, starring Katherine Heigl as a pharmaceutical sales rep, discusses the billion dollar psycho/pharmaceutical marketing campaign designed to get millions of people on psychotropic drugs through slick drug ads and marketing campaigns that include ghost writing pro-drug articles for medical journals.

Meanwhile, you think advertising on TV is the final resting stop for the drug companies? Think again.

The newest fertile ground is the online marketing of drugs.

There’s been an explosive growth in online advertising: the pharmaceutical industry spent more than $1 billion on Internet ads last year and is projected to spend $1.7 billion on such marketing efforts in 2012. 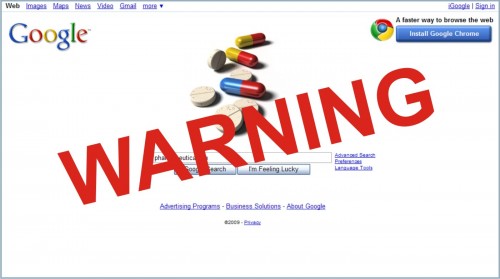 And with that growth comes the potential for more unscrupulous advertising, because it’s much harder for the FDA to monitor all the websites that drug companies advertise on. Both Eli Lilly and Merck have received warning letters this year from the FDA accusing them of misleading online advertisements, but many more online ads escape the eyes of the FDA.

The drug company McNeil developed their own social media site called “ADHD Allies”—aimed at adults with ADHD—and on the site offer an online podcast on financial advice and an ADHD self-assessment tool.

What McNeil and many other drug companies are doing with their online advertising is slick and unscrupulous. The websites don’t mention the company’s product but rather market the disease, under the guise of attempting to share information and educate the public, especially those with the disease.

On these websites, the tone is educational, with the specific disease discussed, but the only options given are pharmaceutical ones. It’s not so easy to tell that a specific drug company is behind the website.

By doing things this way, drug companies can overcome fears of running afoul of FDA regulations that govern drug advertising and at the same time help brand and position their companies in a positive light with both the general public and doctors.

So next time you hear the slogan “Ask Your Doctor,” remember that the slogan is not being used with your best interests in mind.