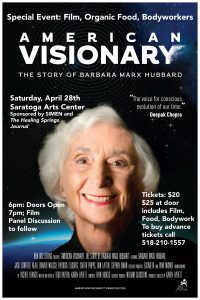 Barbara Marx Hubbard is one of the most remarkable and dynamic people living on the planet. At 87 years young, she is still going strong in her quest to change the destiny of humans and the future of our planet.

The movie “American Visionary: The Story of Barbara Marx Hubbard” lays out her work, and a special showing of the film is planned in Saratoga Springs, NY on Saturday evening, April 28, 2018 at the Dee Sarno Theater at the Saratoga Arts Center, 320 Broadway. You can see the trailer to the film above.

You can register for the event here: American Visionary: The Story of Barbara Marx Hubbard.

The doors open at 6pm for this festive event and celebration. Admission is $20 in advance and $25 at the door, and the admission price includes, in addition to the film, a vegan, organic food spread courtesy of the Four Seasons Natural Foods Cafe; bodyworkers offering free bodywork; and a panel discussion after the film.

This gala event is being done to celebrate the amazing pioneering work of Barbara Marx Hubbard and her quest to help people understand the concept of conscious evolution and what that means in our lives.

Barbara, influenced and inspired by the works of such luminaries as the Indian mystic. political revolutionary, and integral philosopher Sri Aurobindo; the French Jesuit priest Pierre Teilhard de Chardin; and the visionary architect Buckminster Fuller; has singlehandedly done more to change our planet than perhaps any other living person. She has been a beacon of light that has illuminated the world for over 50 years.

As an author, speaker, and co-founder and president of the Foundation for Conscious Evolution, Barbara understands that humanity now, as never before, is on the threshold of a quantum leap. She states that if we are able to integrate newly emergent scientific, social, and spiritual capacities, we could transform ourselves to move beyond our current global crises to a magnificent future equal to our vast new potential.

Without Barbara, there would be no natural/organic foods movement in this country, nor a holistic health movement – which is why it is fitting to offer free organic foods and free bodywork in conjunction with the film.

Come to the event and during the film hear what many of the people who have been influenced and inspired by her have to say: the film features over 40 speakers, including Jack Canfield, Neale Donald Walsch, Marianne Williamson, Carter Phipps, Jean Houston, Stephen Dinan, and more.

You can register for the event here: American Visionary: The Story of Barbara Marx Hubbard.